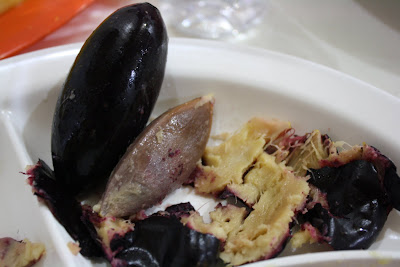 First, Zac Sarian sets on my plate this extra large, over riped duhat? Oversized black olive?
He said "Pili, eat it". I just know Pili brittles. How? Holding it, it was soft and squishy. You eat the pulp...hmmm...not something I will look for. It has a gas taste for me, like eating gellied kerosene. The nut is now exposed and it is roasted and cracked? Didn't ask...would rather remove the memory of the pulp on my tongue and rewind my tastebuds to my crispy pili honey brittles.
Ok, so they said pili oil commands a high price and 1hectare will be a good profit. But then, am not into wanting to go into processing. Sure you may sell the nuts to the processor, but I like to "farm to end user" work.
Walking around the stalls, I saw this lady selling Pili planting materials.  Several people bought them. 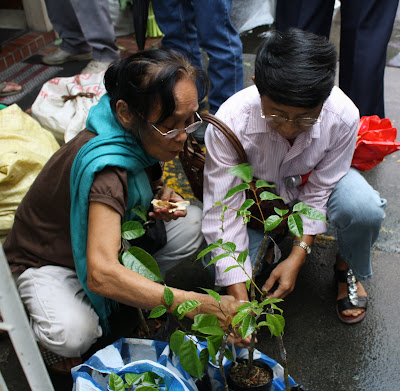 Maybe I should have even just a couple of trees.  So I can roast some in the farm and crack them.  Maybe if we raised  and harvested it ourselves, the pride in them will spell the difference.
Posted by solraya at 2:55 PM No comments:

Last week our Philippines for Natural Farming, Inc group had a farm tour.
1st stop was at the Teresa Orchard of Mr. Zac Sarian. Everyone's jaw dropped when we saw this Mama Sita tree. Maurie Ocampo, who's grown and traded bananas before said he never saw this big variety before. Counting it, one heart can have around thirty (30) bunches! 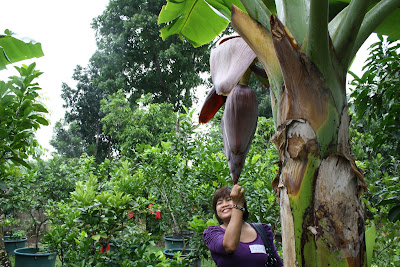 When we visited AANI Urban Garden in Antipolo, we walked past through fruit trees in containers.  Notice the trees behind the Mama Sita?  They were in containers too.   Good thing about these? They are mobile and transportable, since they are planted in big plastic bins. No reason for your trees to get damaged in strong winds, as you will be able to move them to sheltered areas.
Best thing?  Great as gifts...don't you think so?  For someone who has everything...almost...it will be nice to give a Sampalok Tree with all the flowers in bloom with fruits...or look, is that a Guava? 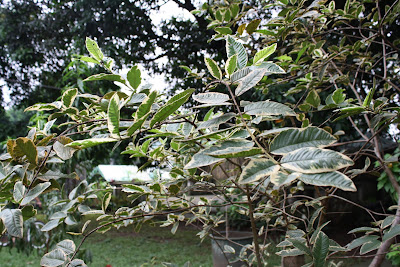 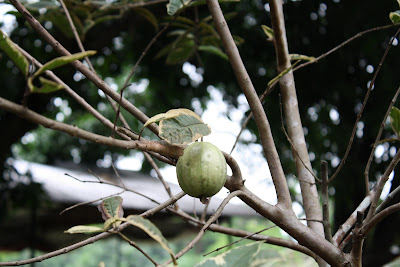 The fruit is also striped... 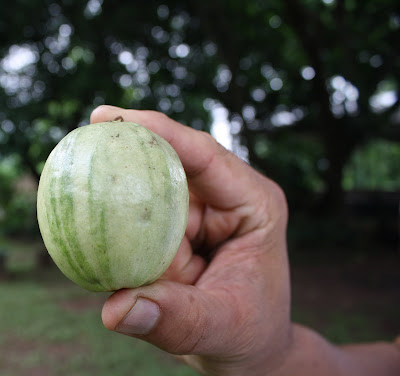 Sweet!  Don't think it had a variagated taste to it.  With my eyes closed, it was simply a Guava. 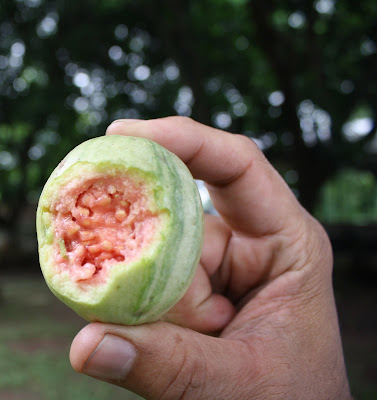 You know, after I took a second bite, the striped fruit fell to the ground.  I brushed it and ate it all up.  AANI Urban Farm was into organic farming anyway hahahhaha.

Going back to the fruit trees in containers...sound business idea. Thing is you need to patience to wait for it to grow to a good market size price :)
Posted by solraya at 9:40 PM No comments:

I was at a food writing seminar today, Power of Pen 3, when the Manila Bulletin booth was unpacking and preparing their table. Asking what Agriculture Magazine they had, they said August. Wow...sure? YES! 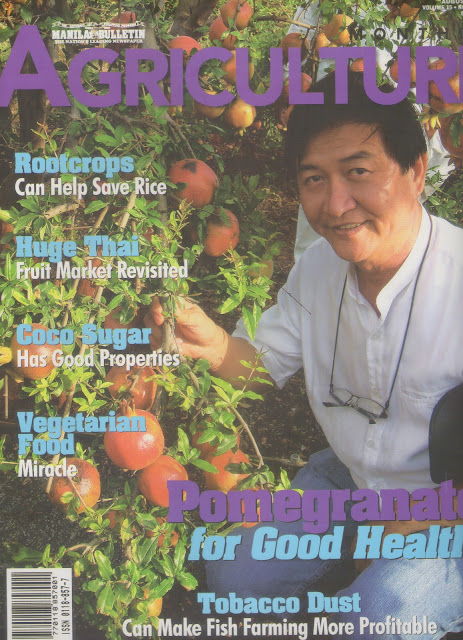 Happy to write about the Glinoga Organic Farm :) 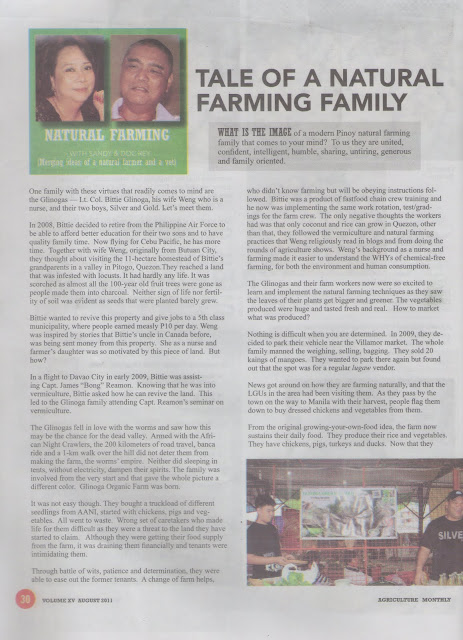 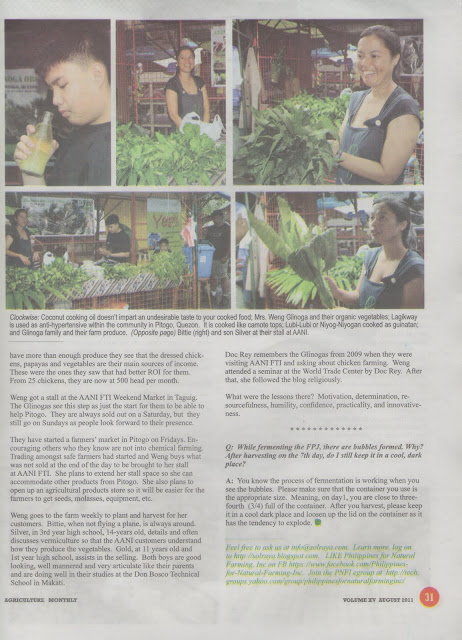 Bacolod Here We Are

We had been needing a vacation.  A long one is being planned, but our bodies and minds need one soonest.
Bacolod it is, to visit friends.
We can't be totally away from farming and the advocacy...with the coordination of Pam Henares, see you if you want to learn about pastured chickens :)
WHAT:  Raising Pastured Chickens
WHEN: August 15, 2-5pm
WHERE: NISARD Office, Provincial Capitol
WHO: Doc Rey will give the seminar

This will be free and open to all.
Posted by solraya at 2:08 PM No comments:

After experimenting and getting good results with pasturing white broilers, Doc Rey decided to try raising the white layers in natural farming conditions.
We didn't pasture them, as they will mix with our broilers, as the ranging chickens can't be stopped from visiting neighbors in other ranging areas.
Trial of white layers, we used the HiSex brand of Console Farms. Housing was airy and gave them a lot of room and sunshine. There were fed the same way the pastured whites were. Last week, on week 19, they started making their "clacking" sound. Then, their diet was supplemented with calcium....snails and egg shells. 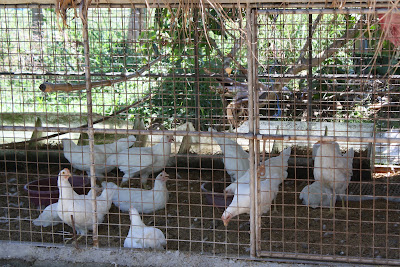 On week 20, the first drops...notice their size and the color? 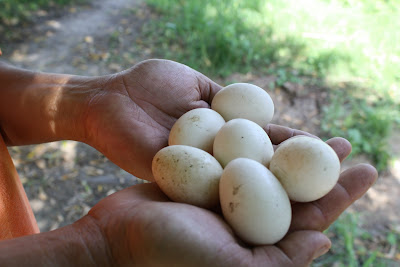 Look how deep yellow the yolk is and how thick the egg white is :) 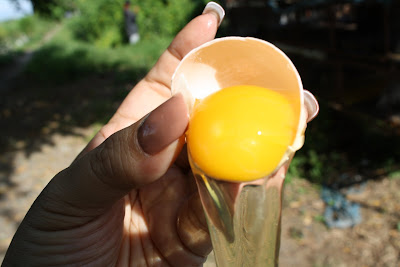 The cleanliness of the chicken and the eggs is not based on the color of the feathers, but it is in how it how it was raised.
Posted by solraya at 9:36 PM No comments:

When I was doing an interview for an article, my question on what beddings and manner of brooding came up. I was expecting the normal brooding practices of either conventional or natural farming, but this was a nice blend of science and natural.
Charcoal Heater: Using this kind of artificial heater is a big advantage to natural farmers because it  is very cost efficient and at the same time the smoke helps repel mosquitoes that is the carrier of fowl pox. The heat is very much scattered equally at the brooder that even if you are standing at the edge of the brooder, you can feel the heat that is produced. One heater can be used for up to 1000 heads of chicks.   If you used it for just 14 days for brooding time, you can re use it for as much as 5 times for 14day cycles. It is made of  thin galvanized plain sheets, so it burns over time as you use it. 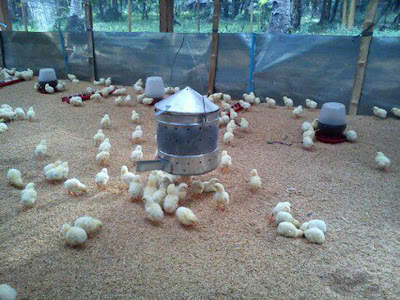 A topic that played on our minds is the family as a unit...a natural farming family. Rare time that Doc Rey and I will be on the same wavelength, but we were one on this...the Glinogas.
Mid June, after I rushed my July2011 debut column, I met the Glinogas for an interview. Gold, the younger son, was sick but he patiently obliged and quietly waited. Silver, the older one, animatedly intermediated during the interview. These are 11 and 14 year old boys. I told Doc Rey he missed the wonderful vibes of the family!
Bittie Glinoga, an airforce pilot meets a nurse, Weng Fortun, during a course for paramedics/rescue, where she was the teacher.  One had a land, the other was raised by a farming family. Years later, they wanted to revive the denuded farm and give jobs to Pitogo, Quezon folks.  Glinoga Organic Farm was born. I won't preempt our column for August 2011, but just a preview of things: 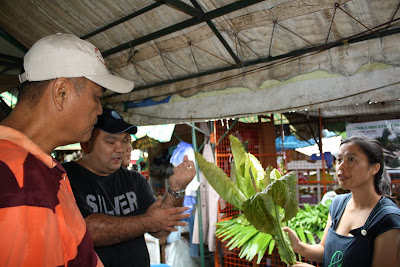 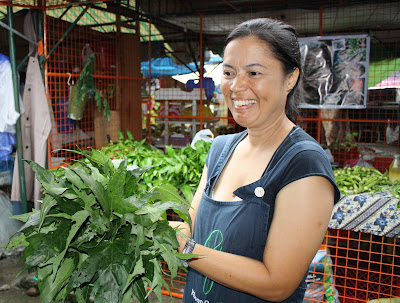 Lagikway used as anti-hypertensive in the Pitogo, Quezon community.  Cooked like Camote Tops.
The Glinoga Organic Farm has a stall at the AANI FTI Weekend Market every Saturday and Sunday.  I told them that I wish that MM of Market Manila discovers them there.  That was in June.  After two (2) weeks, read this post :)  Good things are hard not to be noticed! 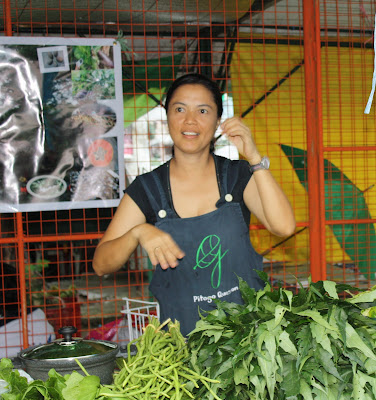 Doc Rey will do a seminar in Alaminos, Pangasinan on August 8, 1pm.  Cityhall.

Join us if you are interested to learn about pasturing chickens....it is FREE :)
Posted by solraya at 7:56 PM No comments:

We are proud of our pastured, free ranging native pigs.  They are on a purely Azolla, fruits and vegetables diet, not having been given grains.  The pigs are such big grass eaters too and are natural tillers, as they nose their way around and all through the area.
This is exciting for us as we learned the ropes.  Expanding this line in the farm. The butcher himself can't believe that he has seen backfat that "thin".  Clients said they had never had pork taste this good, and they were getting our regular naturally farmed white pigs already.
Probably the pure fruits and vegetables diet and the exercise they got being pastured :) 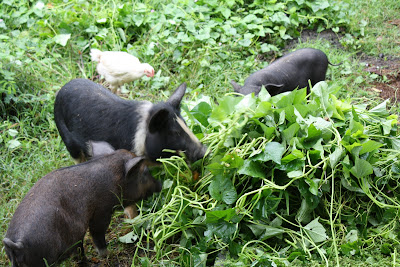 We roasted a pata the other day. Take note of the bottom of the rack....no oil! 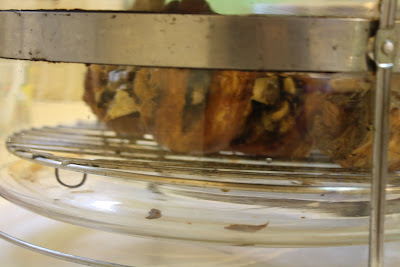 View from the top, as the Roasted Pata was to be taken out of the rack.  You can see how clear the bottom was.  The yellow hue of the picture is the color of the table top. 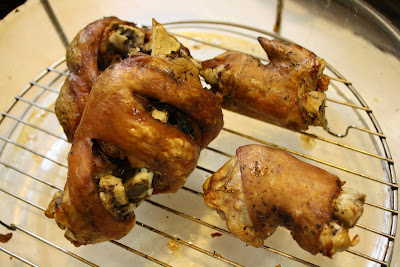 Our column "Natural Farming w/ Sandy and Doc Rey" debuts in the Agriculture Magazine for July 2011. 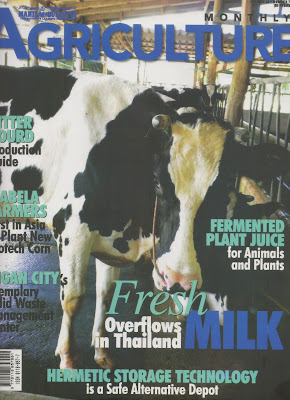 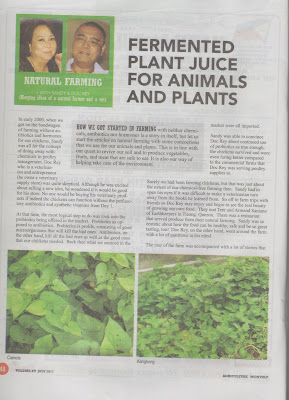 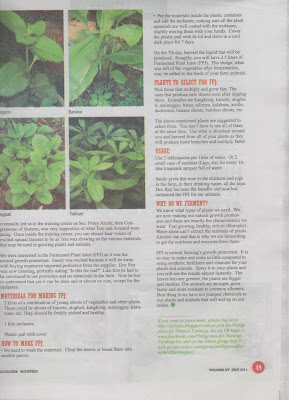 Mr. Zac Sarian makes an announcement in his Agripage of Manila Bulletin: 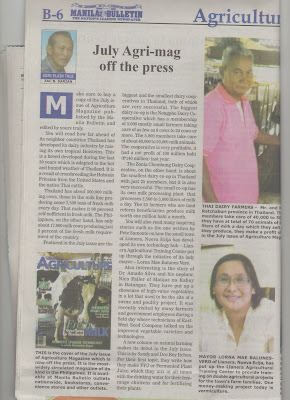 Breakthrough for natural farming. Great opportunity for Philippines for Natural Farming Inc :)
Posted by solraya at 6:56 PM No comments:

Doc Rey brought me this gift from the farm. It was intentionally meant for me to sell at my weekend market stall as the clients gobble up what we produce in the farm. 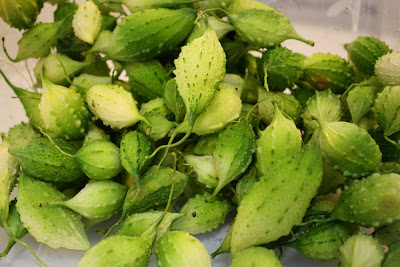 But I remember that he needs his supply of Fermented Amapala. So why let a good produce go by. I decided to give back the gift of health and love by making a him a good batch of Fermented Wild Ampalaya.

Learn how to make it here.  Very good to control blood sugar.  It really works wonders.
Posted by solraya at 6:45 PM No comments: