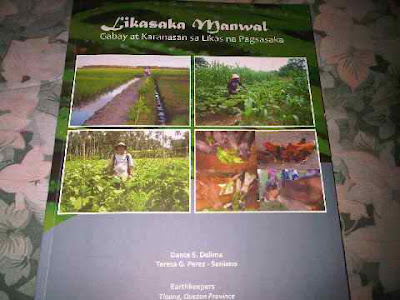 2nd edition now.
The 1st edition is a staple in my bag.  I never realized how used my copy was until I saw the new 2nd edition, that was all clean and no creases.  Had my copy autographed by Tere and Dante who are both true blue natural farmers.
Perfect guide as you learn about natural farming.  The concoctions used to replace chemical fertilizers are well illustrated and easy to comprehend.
A must have for all advocates of natural farming.  A great gift too for farmer friends or for those who want to know the difference of farming clean food :)
PHP400 for pick up in Manila.  For an additional PHP250, we can send by LBC.  Email us at info@solraya.com for orders.

If we send by LBC:

Go With The Flow 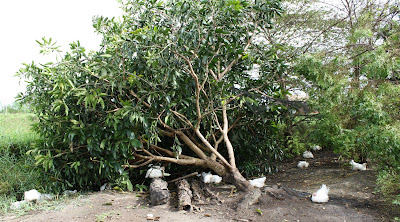 Just came back from Lucena to attend the 7th National Organic Agricultural Congress (NOAC).  Very successful and it was a great opportunity for the meeting of minds of organic and natural farmers.
Many have opened their minds to pasturing white chickens.  There are problems with the over supply of white chicks now in the Philippines...so let's use that to our advantage!  Let's pasture and free range the whites.  It is cheaper and easy to find.  Big help to us smaller farmers.
Key words were echoed and served as discernment :)
Brings us to going with the flow.  Recent Typhoon Juan had almost all our trees in the farm down.  It will take a lot of energy and time to prop them up again, with the risk of stressing their roots. We decided to let them be and let them lie as they are now.  Easier to to harvest and we won't be jumpy whenever a storm warning is up again.

Listen  and observe, to guide you to do what is right.
Posted by solraya at 11:10 PM No comments:

Starting November 7, Philippines for Natural Farming, Inc will have a booth to showcase natural farming from "how to" to marketing of produce and end products. PNFI is committed to spread the good deed of us farming back to basics and using the materials around us for sustainability. We are also aware that our members need a marketing arm to start them off.

Sunshine Chicken is one of the products that will be sold in the booth, together with other produce from our members' farms. Farm inputs, manuals, seeds etc will be made available for those interested to walk the talk with us.

Centris is at the corner of EDSA and Quezon Ave. Parking is convenient and next to the Centris train stop of MRT. The Sunday market will be at the parking lot beside the Centris Walk.

Come and meet us. Experience our passion up close and personal. Please support natural farming in the Philippines!

Join our yahoo group: natural farming in the Philippines.
Posted by solraya at 9:57 AM No comments:

Remember the photos posted earlier, on the batch that was in the brooder during Typhoon Juan? The day after Juan, they were let to the open. A week after at 21days, they were transferred to the range housing.
Meet them now, at 28days. Most of them are out in the range and pasturing themselves:) 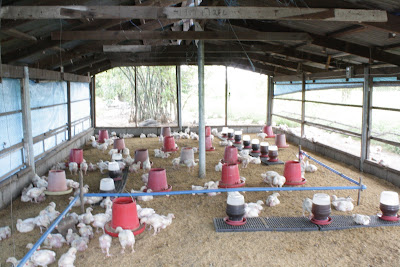 Might be your first time to see white chickens in clean, comfortable and airy cages?
Posted by solraya at 10:01 PM No comments:

Natural farming leads you to always be in the look out and to listen to alternative feeds that are abundant around.  Azolla was one that we can multiply fast in the farm and  is very good for feeding livestock, as well as an active ingredient for FPJ.
Read about Azolla here.
Sometime ago, we tried a batch that we got at Earthkeepers in Tiaong.  It either vanished or died and evaporated in thin air.  It was gone.  Got another batch, same thing!  People were talking about how easy it was to propagate it.   I must be so dumb about Azolla that I can kill what is supposed to be a "can't die".
I was so glad that one of the natural farmers in our group distributed containers of Azolla.....here goes again that line that "you can't kill it"....
1st batch again went to this holding area.  A small pond.  Same thing...vanished!  Hmmmmmm  I was starting to get embarassed that I don't just kill it...it can't be found.
Then I saw these group of Sunshines, coming from that "holding area" for Azolla.  They looked like campers happily walking out of the trail....Couldn't the Sunshines be the culprits and had been eating the Azolla even before they can take off and multiply?
Must be! 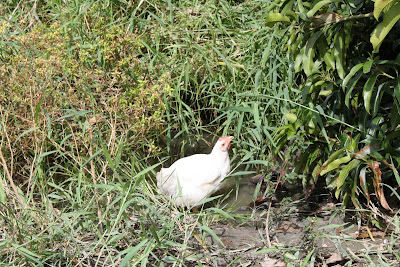 Oh so thankful that my friends decided to trust me again with a small container of Azolla. We decided to now use a contained area. Net it on top. Meaning, secured it much like brooding chicks :)
The ones who see it daily, reports that it hasn't died, but it was just doing OK and floating around.  At least it was still there. 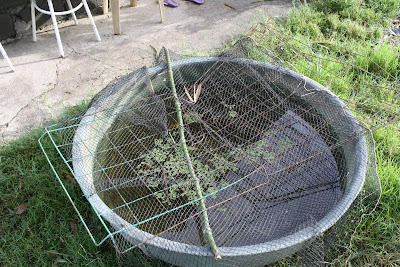 But for me who saw the container after 2weeks.....HEY SUCCESS! 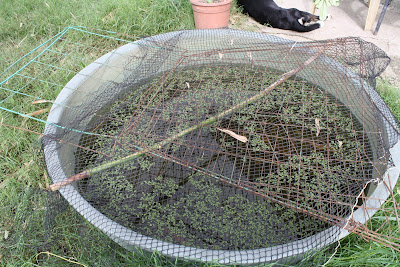 So it was the Sunshines after all :)  One thing is sure, they loved eating Azolla :)
Posted by solraya at 10:55 AM 4 comments: