We had been planning and talking about having pigs in our farm. All talk no do! We need to construct a pig pen, right? Well we never got around past talking about where to locate it.
Over the weekend Doc Rey asks the staff to source native piglets. He thought that it will force him to move and get his pig pen act together if he had piglets waiting to be transferred.
The staff were able to get three (3) native piglets! The natives ones in our area are black, big and low bellies.
We had a spare brooder for emergency space that is a cage of the bed of an Elf truck. It had been designed and tried against rats when we brood chicks, so this will be a good holding pen for the new babies of the farm.
It is set under trees and very close to where we eat our breakfast and seating area in the farm. Best guage for the "no smell pigs". The bedding is soil, topped with rice hull, sprayed with Indigenous Micro Organisms (IMO) that we make for the farm as we practice natural farming.
Initially when the piglets got to the farm, they were given Fermented Plant Juice (FPJ) in their drinking water. They didn't want to touch the grains offered to them. Our caretaker thought that since they were native pigs, they were used to the indigenous diet in their area. She gave them chopped kangkong and Azolla :) They loved it.
Today was the first time we will see them. Drove past the gate, inspecting the fruit trees as we drove by. Talking about the flowering Duhat and Mango trees..but wanting to wring Doc Rey to drive faster to get to my black babies!
Parked by Pen#1 of the chickens and we had to walk through the other pens to check on them before getting to my breakfast area. Now I see them!!!!! 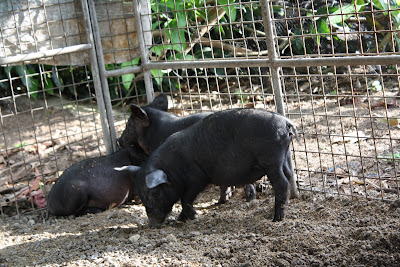 Cutest three (3) Little Black Pigs! I named them Annie, Jojie and Sandy hahahhaha
I sniffed sniffed around....no smell :) Thanks to the workings of the IMO, sunshine, air and shade around them. Same with chickens and humans....that is also what the piggies need.
Now they have started to eat grains, but still prefer their vegetable salad, with their FPJ in their drinking water. 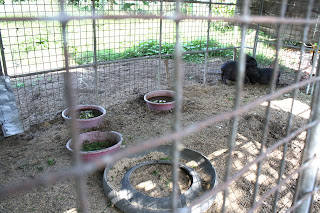 Now, Doc Rey is busy making the pig pens. And talks are now about getting a hospicio for native pigs :)
Posted by solraya at 2:09 PM