This was what kept me excited yesterday as it was confirmed that my 1st article
was accepted with minimal revision (2 words!) and that please send our photos
for showing beside the name (sounded real already) and if we can write the next
article already (am still not yet over the awe that it is real).
Someone told me last week that I should have sent several so the editor may have
a wider selection, if not, my material may just be set aside. I shrugged my
shoulder and thought, we wrote what we thought was best for the 1st :)
Final, Mr. Zac Sarian is giving Sandy and Doc Rey a column. I submitted my copy
with SUNSHINE w/ Sandy and Doc Rey as the original column name. When the final
copy was sent back to me, they changed the column title to "Natural Farming
with Sandy and Doc Rey".
Very good timing when Zac asked us, as it was the perfect venue to market PNFI.
He didn't give me parameters and I can write about anything. Breakthrough for
marketing of PNFI :)
Background:
Long ago, Rey and Zac were going to do a series of books. Soon after we met
Andry, and the idea came to me about the "He saym She says"....why not "natural
farmer says, Vet says"! Great! But, the natural farming protocols came later,
after that probably when it did, our interest on the project waned or Zac was
preoccupied and didn't want to write it. Can't be sure what was the real
reason.
Last week when we were talking....I didn't even mention yet about PNFI as I was
going to give press releases to market PNFI.....he said he wanted me and Doc Rey
to write a column on livestock and poultry. I asked if he was serious and if he
was, can it be about something that was encompassing and closer to our hearts
now...natural farming. Then he said...perfect to bring back my original idea of
"natural farmers says, Vet says" now perfect!
Look at my article's last line :)
join the Philippines for Natural Farming, Inc on FB
https://www.facebook.com/Philippines-for-Natural-Farming-Inc and on the Yahoo
group http://tech.groups.yahoo.com/group/philippinesfornaturalfarminginc/
I am lining up already next articles....Mabuhay ang natural farming. Mabuhay
ang PNFI!
Mr. Sarian just called now...waiting for the photos as the July issue is being
laid out, and asking about next article submission....totoo na nga ito.
Posted by solraya at 11:21 AM 1 comment:

This used to be the Food Bowl Night Market.

The organizers saw the strength of the advocacy, the member farmer groups sticking out late nights Fridays and Saturdays.  Now, they are rewarding the group a Sunday morning market, and now be known as the Food Bowl Organic Market at the Centris Walk at EDSA cor Quezon Ave.

Very convenient and easy to go to.  You can even make a drive thru purchase.  Covered area so safe from rains and on cemented flooring so no muddy feet :)

Now it'll be Fridays and Saturdays at 4-11pm then Sundays at 6am-2pm.  This June 19, Sunday, Father's Day will be opening for the Sunday morning.  It will start off with a Thanksgiving Mass, so for those who would like to join, please come.

Seminars on natural and organic farming are being scheduled.

Breakfast at the Farm

Entering the gate of the farm, we go by fruit trees. The one that we had been waiting for excitedly is the Duhat at this is very sweet and meaty. Doc Rey just had to stop and get some. You think we can wait to eat it?
As soon as he got off the car and put some on his cowboy hat, I got off too and we both enjoyed the sweet and juicy Duhat. We got all that we can reach out to. Whewhhhh...that was a lot of exercising as we stretched up our arms to pluck the coveted fruits.
You think that was enough? Nope. He had to climb and I was there acting as his arm's GPS...navigating and steering as he can't see where the fruits were. Even while peeking around, we really got good exercise here.
See how good my vantage point was :) 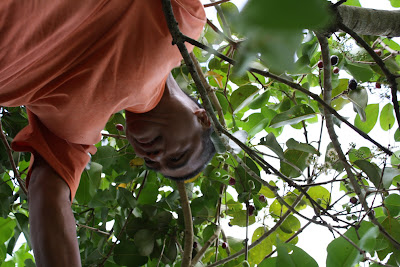 By the time we were done walking around the farm, we sat down to a heavenly meal that was from the farm. Naturally farmed fish, kamatis, manggang hilaw, dayap with bagoong, wild ampalaya, boiled talong, okra and kamote. We ended that breakfast with Suha we picked off our tree too! 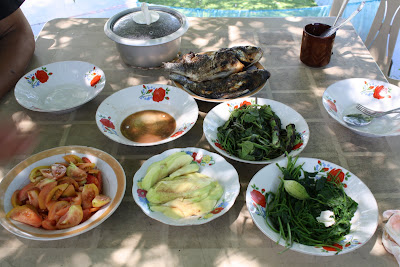 All in Santiago City, Isabela. We hope more people here see the importance of safe food on the table and do natural farming.
Posted by solraya at 3:31 PM No comments:

Does natural farming interest you?

Great way to exchange info and ideas :)
Posted by solraya at 3:45 PM 1 comment: