Brooding For A Storm

We all had a lot of warnings.  There was a lot of time to prepare way before the expected landfall of Megi, Typhoon Juan in the Philippines.
For pastured chicken farmers like you and I, what can we do?  Moreso when you have a batch brooding.
For now, we are brooding in the same range housing.  They were in shaded areas, but no good fencing around.  Doc Rey wanted an area that will have windbreakers, near the caretaker's house, accessible to water.  So he assessed what we had that may work for us:
1) In the garage, he saw unusued aluminum vans and the dismantled truck bed enclosures.  He asked that be brought to the spot he saw that had trees that will be good windbreakers.  Close to the house of the caretaker and the water pump.
2) Not just sitting them on the ground, he sort of had it buried a bit.  Dug canal around the cages and area, for drainage.
3) Found old roofing materials that was wrapped all around.  Why?  Don't forget the RATS!  They will surely want dry ground for themselves too :)  They can't climb the slippery surface.
But can the chicks have good air circulation inside that cage?  There was a reason why they were retired to the garage.  These pieces of roofing material had holes on them already. Perfect for air inlets.  The wire mesh all around the cage was guarantee enough that fresh air circulates and bad air escapes.
Others were set on top as roofs. They were tied to the cages.
4) Trucks' tarpaulins were set on top of the roof.  Remember those yeros were butas already :)  Roofweights were needed.  Got old tires and the stacked chicken crates that were near the water pump for washing.
It was very good!  Did what it was supposed to do, as planned, from materials that were to be found around you.
The trees all around fell and didn't withstand the strong winds of Juan, but it did to the cage its purpose.  It protected the brooder from the rage of the typhoon.  The brooding Sunshines were very healthy and energetic when the cage was opened after the storm! 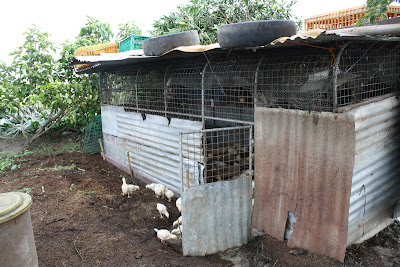 We had several of the cages set up.  You don't want them to pile up one on top of the other when they get afraid and cold.  Stampedes are less likely in smaller spaces.
Let's take a closer look inside.  Aside from the gas brooder that was good for 1000 birds, there was another standby brooder for the same capacity.  If you will notice, this area isn't for 1000 birds, so why have big capacity brooders being used?  You have to make sure they are warm.  It will be terribly cold out there during the storm and no such thing as over prepared. 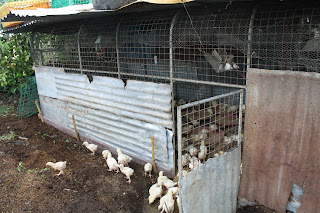 From the other side and behind:  The fallen tree was acting as shade before the storm came, as it was prepared a couple of days prior.  The large LPG tank, the source of energy for the gas brooder.....heavy stuff, can't be blown away.  Doc Rey still played safe.  He had charcoal heaters on standby. 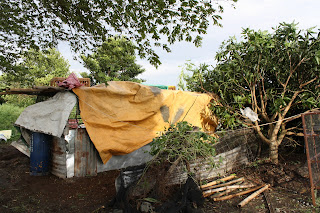 We've learned over the years.  I hope you have taken some points from us too to guide you through.
Posted by solraya at 8:18 AM